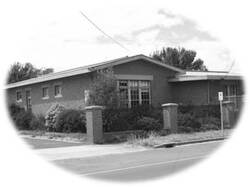 Ballarat Orphanage and Ballarat Children's Home School No 1256
The Ballarat Children’s Home and its Primary School have grown up together and thus the histories of both are inextricably interwoven. The school was originally known as the Ballarat Orphan Asylum or Orphanage School. The Orphanage itself opened in October 1866 and the school was inchoated in 1873. In September Henry Davies, Secretary of the Ballarat District Orphan Asylum, offered the lease of on room at the Orphanage for use as a State School at the nominal fee of 1s p.a. School began on 1st October 1873 in not one, but two large rooms – 56ftx28ft and 28ftx20ft. This school came under the control of the Board of Advice No. 6, Town of Ballarat East. HT L.H. Kildahl at a salary of £221, had as assistants Jane Reilly, Alfred Roff, Honora Carn and Mary J. Doepel. The last two were PTs. For the first six months the daily a.a. was 197. The enrollment was 405. This low daily average was doubtless brought about by the fact that children were expected to attend school for only 60 days in each half-year. Outsiders were allowed to attend the Orphanage School, and the Secretary of the Orphanage requested that the Department provide out-houses for them ‘as the inmates were remarkable for enjoying excellent health and perfect freedom from any kind of disease’.  A drum and fife band were formed in 1880 and about 20 years later a brass band was begun. Such great leaders as Arthur Prout, Percy Coad and Alf Rowell were responsible for this band becoming known throughout the nation. With the abolition of Boards of Advice in 1911, the first Committee comprised a number of influential citizens: T.C. Miller, Chairman; Arthur Kenny, Correspondent; Baker, T. Hollway and John Dunn.
By 1917 three rooms were in use as classrooms, the NE being 200. The foundation stone of a new school was laid on 26th of July 1919. It was completed early in 1920, consisting of two classrooms, 21ftx24ft, and 27ftx24ft, plus and office and staff room. In February 1922 Ballarat High enrolled a number of students from the Orphanage for the first time. In 1929 a steam radiation heating system was installed in the school. The school recalls with pride that during the second World War over 200 ex-students served in the Australian armed forces. Ten lost there lives. One of these, Albert W. Leach, bequeathed his estate to the Orphanage. A modern Children’s Cottage bears silent testimony to his memory and benevolence. A pre-fabricated double classroom was erected in 1951 at a cost of £5, 983. It was used for the first time on 20th of February 1952. With the change of name in 1968 the school became known as Primary School No. 1256 Children’s Home Ballarat. In 1970 the status was raised to Class 1. It now has a NE of 134 and a teaching staff of 11. The Children’s Home School has stressed the intangible aspects of education and has played a very significant role in helping to prepare the children to live a full and useful life in an ever changing world.
​Education Department of Victoria 1973, Vol 2

Ballarat Orphanage and Ballarat Children's Home  history must be recognized! ​

Throughout the city of  Ballarat  there were over fifteen institutions or Homes, Ballarat Benevolent Asylum ​,Female Refuge, Alexandra Babies Toddlers Home, Ballarat District Orphan Asylum, Ballarat  Orphanage, Ballarat Children's Home , Nazareth House and St Joseph's Home  just to name a few .
Many of  plaques , photos , objects and  memorabilia are scatted. from the former Ballarat Orphanage and Children's Home the school would have made an ideal Goldfield of Institutions Museum , with its L shape design inside along with four large class rooms would comfortably house all of its history and anything associated with institutional life under the one roof. The history of Forgotten Australians, Stolen Generation and Former Child Migrants, a museum like this would give the community and wider a  better understanding  of its history which needs to be shared  seen not forgotten or hidden away.

The big question now is what's going to happen to all the plaques, items and materials  removed from the site ?
Past residents would like to see all plaques,items and materials be returned to the site as part of the redevelopment lets hope the developers are too thinking on the idea. ​

They hold the most keep treasures of the past with records,artifacts,photos,Annual Reports,News paper clippings,Honour Boards of Presidents and Matrons of the Homes ,Roll of Honour, Board, First and Second World,Videos and films Wars, photos of reunions starting back 1980's. Cafs is also the organisation for personal and family records. You will find them here

Ballarat Gold Museum holds a large collection of memorabilia from the Orphanage and Children's Home times , many past residents have visited the museum to look through their collection.
​Explore online some of their collection here.