The former Toddlers Block building is located in Victoria street Ballarat East built in 1929 a wing extended in1939 is named after James Kerslake also named "Kenny's Memorial” the building once was very much part of the original old orphanage building when the old building was demolished 1965, the toddlers block remained, which was named after longstanding Superintendent  Mr. Arthur Kenny 1885 – 1926 of 50 years’ service Miss L. Kenny Matron from 1920 – 1926.
​Below is a story about James Kerslake the significance of the Toddlers Block .
Courtesy of Ms Schreuder  her submission to the panel April 2014 Thank you for sharing

​The Kenny's of Newmarket Country Cork. "Arthur was born 1846 or 1847 in Newmarket. In 1872 he immigrated to Melbourne in the then British Crown Colony of Victoria (Australia) aboard the Star Queen. On the same ship were an Irish born brother and sister of Scottish descent  19 year old James McMurtrie and his 28 year old sister Jean. Arthur and Jean were married at Pyrmont in the adjoining colony of New South Wales on 27th December 1873.  Arthur and Jean's first child, another Arthur was born in Warragul, Victoria in 1875. In 1876 the family moved to Ballarat, a small but prosperous city in the Victorian goldfields west of Melbourne and Arthur senior took up a position as gardener at the Ballarat Orphanage. About 1884 Arthur was appointed as Superintendent of the orphanage, a position he held until his death in 1925.  Arthur and Jean had nine children altogether with four reaching adulthood”. Courtesy of Graham Coward.
​ 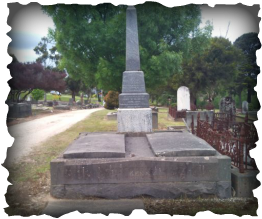